Discover the water in the city

The Meuse River (Dutch: de Maas) is the heart of the city of Maastricht, it gave the city its name and influences it in more ways than you know. Maastricht was founded where the Jeker meets the Maas. The Romans built a castrum and later a bridge at this ford, they named it Traiectum ad Mosa, “crossing place at the Maas”. For the longest time Maastricht was a city over the Maas rather than along or by the river. The Maas was just a waterway and high walls delimited the riverbanks, making it impossible for the local population to walk by the river or to even spot it.

The current access to the riverbanks is as recent as the late 1990s when architect Jo Coenen designed a masterplan for the whole riverbank, organising the infrastructure in such a way that people could have more direct interactions with the Maas for the first time in the city’s 2000-year-old history. The river and the canals around the city shaped much of the city’s infrastructure and led to the creation of surprising places in the urban landscape. This tour invites you to follow the water and let it guide you to unexpected places. Through local stories and anecdotes, discover how the Maastricht community lives with its river. 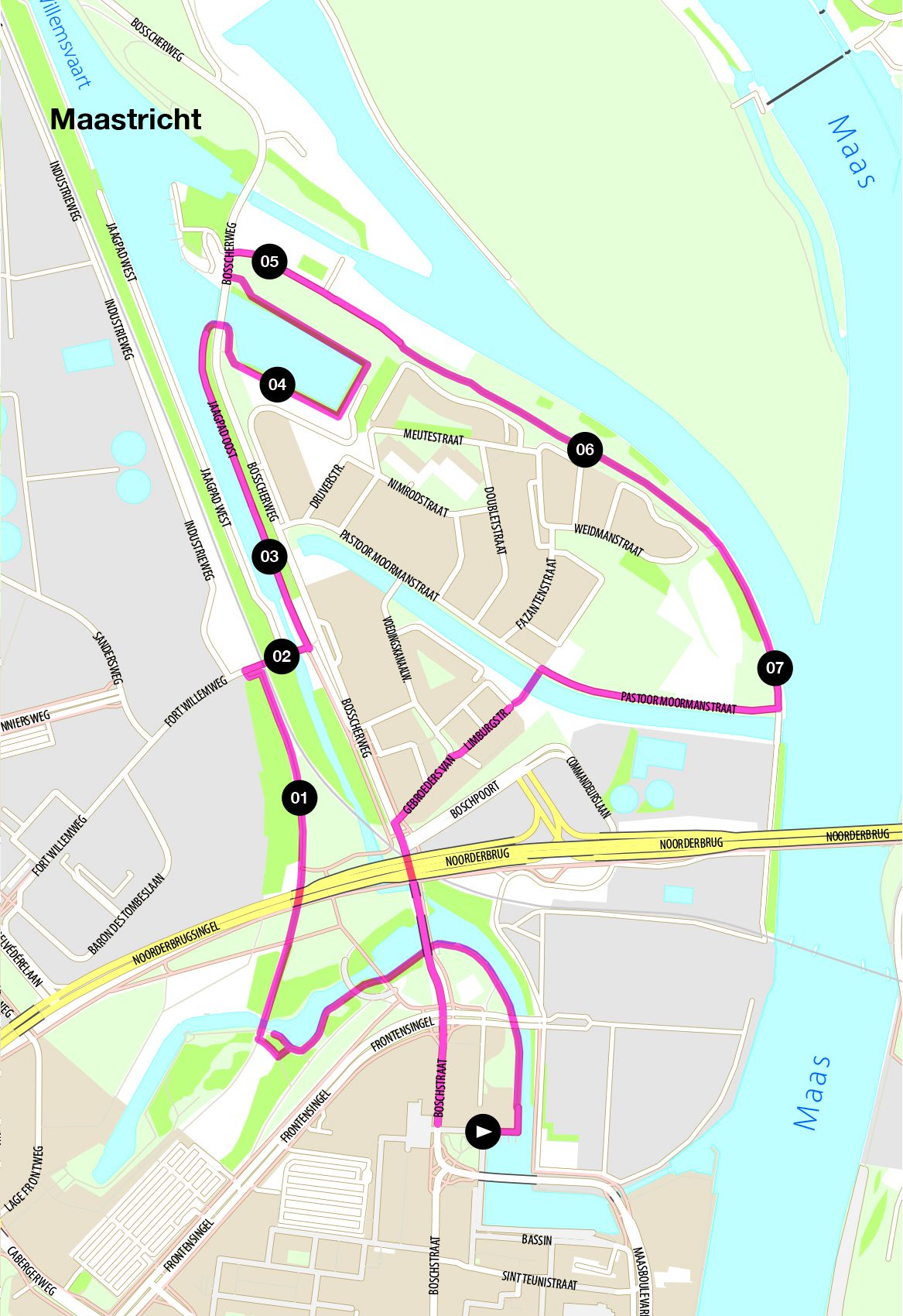 1. Nests of nature by a historical canal

We start at Bureau Europa. Walk down towards Lumière Cinema and then follow the water, round the building. This is the South William’s Canal (Dutch: Zuidwillemsvaart). As you pass under the first bridge, you will see a Bee Hotel on your left. Sand was put here, and the bees simply settled. Residents of the neighbourhood are very fond of it and claim that this is the biggest wild beehive in Europe. This canal was built in 1826 and the section you are walking by has been part of Maastricht’s waterways ever since. It was decisive for the industrial activities around the Bassin, but in time, other canals, like the Juliana Canal took over as trading route. Nowadays only leisure boats navigate this canal. A few years ago, the Noorderbrug was moved a bit further North, opening up space around the canals. In a few years, nature took over the area. Birds nested and trees grew, creating a little nest of nature in the urban landscape. Trimming trees gave people access to the area to turn it into a public park. We can witness how water brings life to the city. The trees and the sounds of birds drown the noise of cars on the bridges above. These green spaces in the city simply take over unused areas. Residents and artists like Expeditie Zilverschoon even come to pick the weeds that grow along the canal to cook and eat. Here, the water from the canals allowed nature to take over the banks and beautifully merges into the urban landscape.

Keep walking along the South William’s Canal all the way to the Lagefronten Park. You will find some picnic tables and a water pump. Continue on the path and take the stairs in the trees on your left. Then, continue onto the Spoorpadbrug and admire the canal from above. Follow the Spoorpad and pass under the Noorderbrug, underneath which, once upon a time (until 1961), there used to be the MVV Football Stadium.

Follow the Spoorpad until the end, and then walk down to the street and underneath the bridge. You will see an old lock on your left. Walk to the lock via Jaagpad West and get on the lock to take in the view. This historical lock was built in 1867 to address issues with the water supply from the Maas. It is one of two locks that give access to the Bassin. It was used up until the 1960s and it was restored in 2002 before being put back into use as a part of the historic Maastricht-Flanders shipping route. It is one of a few locks built on the French model that have been preserved in its original state. Therefore, it is still operated manually – it opens only to let tourist boats or leisure boats through, two hours a day in the morning and afternoon. The people in charge of controlling the boats and opening the lock used to live in the houses next to it. Today, a team of local volunteers activate the lock when needed. Sometimes during the summer, the lock will stay closed as the water levels are too low and could cause houseboats to run aground. The historical Sluis 19 still performs well, controlling the water level and protecting the houseboats from seasonal changes. 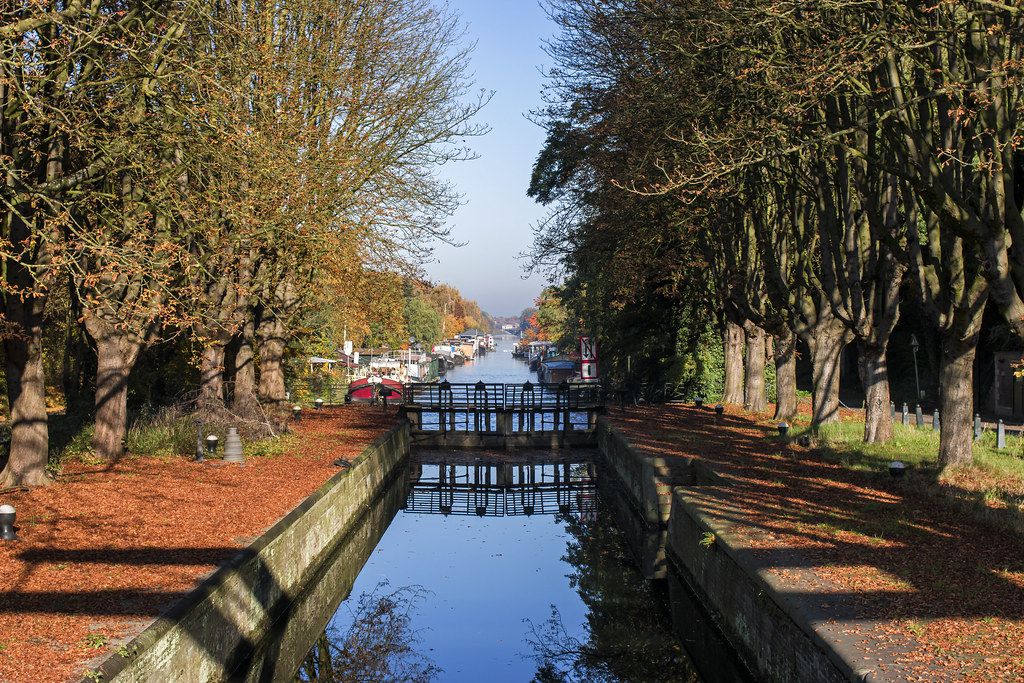 Cross the lock onto Jaagpad Oost and walk along the boats. The Netherlands have a long history of living with water and the houseboats are a key example of this amphibious culture. Living on the water is common in the whole country and here you can witness one of the boat communities of Maastricht. For the boats’ residents, the river rhythms their everyday lives, changing with every rain shower and every season. It flows under their houses and is a constant reminder of the ever-changing nature and flexibility of life. While the canal divides the neighbourhood into two banks, it also creates a connection between the residents as some visit their neighbours not by walking but by rowing little barks. They are also strongly connected to the animals living in the river, young children grow up recognising the birds living by their houses. Residents of this floating neighbourhood feel sheltered from the busy city centre, just a few minutes away. Even during the disastrous floods of July 2021, this neighbourhood was protected by the locks. There was a sense of safety. After all, if the water would rise, they would simply float along with it. The water area on your left is called JoJo Haven. Circle around it by following the path, keeping the water on your left. This space used to be a small port on the edge of the Boschpoort district. It is the second port on the South William’s Canal after the Bassin. Although it is not used as such anymore, there are redevelopment plans.  For now, nature took over the water banks and many residents come here to fish. Here you can spot tortoises, frogs, and many different bird species. You might almost forget the urban landscape around you. When you think of city nature, you often think of the Stadspark, or the Frontenpark. However, nature in the city can also look like this. Uncontrolled wildernesses in between functions that simply default back to plants, birds, and bugs.

Once you go around JoJo Haven and you face the houseboats again, take the stairs up to the road. At the top, go right and then take Bosscherweg on your right.

Walking down the street, you will soon go by a big lock on your left. The Netherlands are internationally famed for their water management, from the mighty dikes of Zeeland to humble waterworks on small canals. Sluis Bosscherveld serves to regulate the water levels in the drainage canal between the South William’s Canal and the Maas. Water bodies in the Netherlands are under tight control by Rijkswaterstaat (executive agency for infrastructure and water management). While this allowed this low-lying country to keep its head above water, some argue that the Netherlands lost touch with its amphibious culture. Practices developed during the Middle Ages such as living on (artificial) elevations or water transportation and evacuation long were common knowledge. As solid dikes and dams keep the water out, some cities were developed in low-laying areas, sometimes onto swamps where soils were covered with concrete. If the water now rises, there is no need to move out of the way anymore. However, for flooding to occur, a storm is no longer necessary: heavy rainfall suffices as the soil has become unable to absorb the water and drainage systems overflow with disastrous consequences – even in Maastricht. 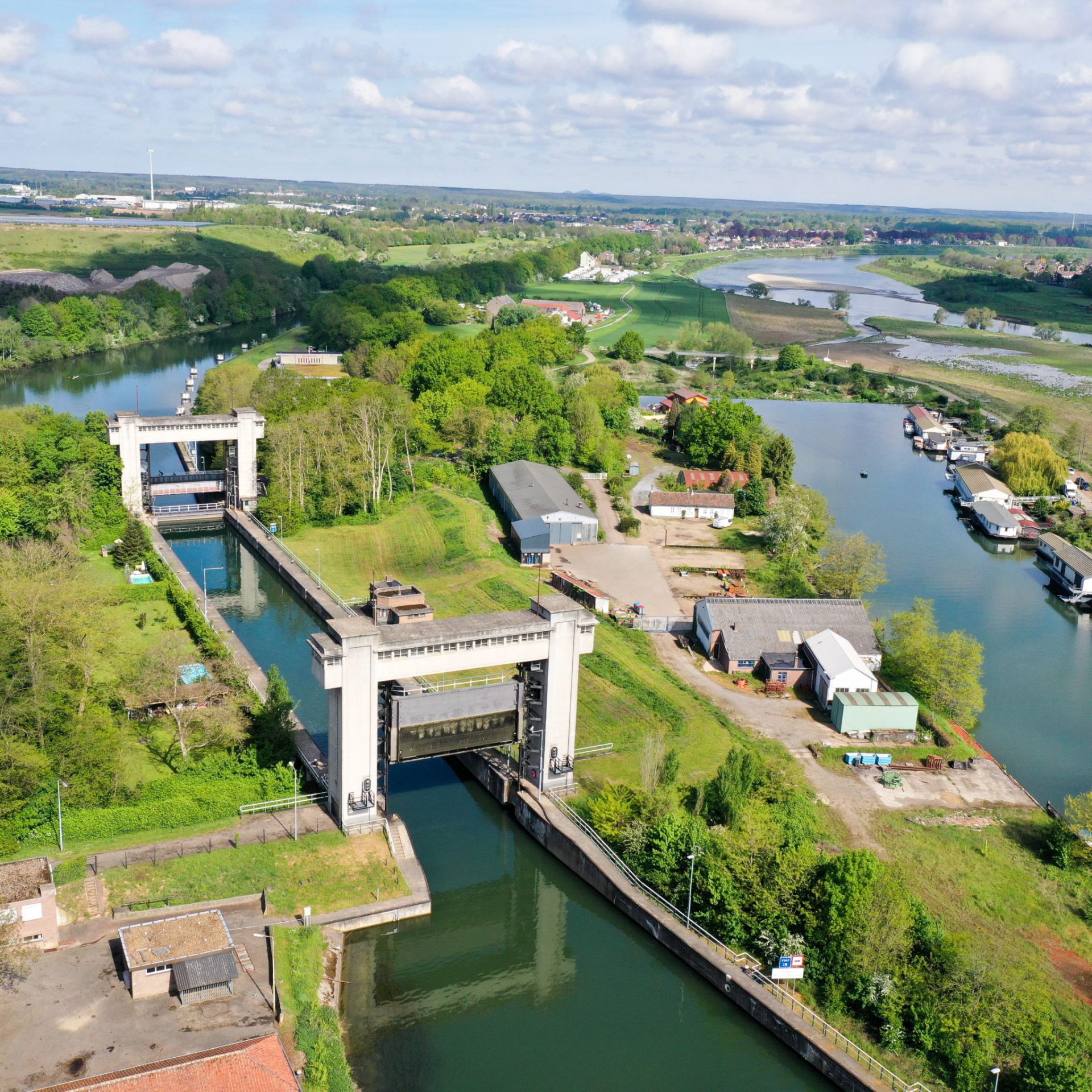 6. The plain, the floods

Pass by the Sluis Bosscherveld and continue forward by walking along the river. Follow the path in the grass and enjoy this green plain by the river. In July 2021, huge rainfall led rivers in Belgium, Germany and the Netherlands to grow out of their beds, where great swathes of land and residential areas were flooded by the Maas and Geul rivers. The plain you are walking on right now, for instance. The floods were a strong reminder of the river’s potentially dangerous presence. Maastricht was out of sorts, the city nigh unreachable due to the upturned infrastructure and public transportation services. Neighbourhoods like Heugem and Randwyck had to be wholly evacuated. This left a strong impression on the residents.

“The sound, you never forget the sound. The sound, the speed, and the size of the water is impressive, you are helpless against something this powerful. Such power, such energy. Yet I noticed that the scary thing for people is not the speed of the water. What is scary is the rising. And the rising was very slow, so very slow. Very quiet.”
– Peters

“I remember when it happened, I was kind of laughing, like, it's so high, it looks like it's going to flood at any point. I didn't believe it would actually happen. Eventually, we got an alert on our phones saying we must evacuate right now. So, we had to pack all our things. We have three dogs and a cat, so we had to pack them too. And we left. Nothing flooded in our suburb, so we were fine in the end, but it was really stressful. Just a few more centimetres and it would've been a bad experience”
– Imke

“There's this overwhelming acknowledgement that we simply don't control the water.”
– Anne-Linde 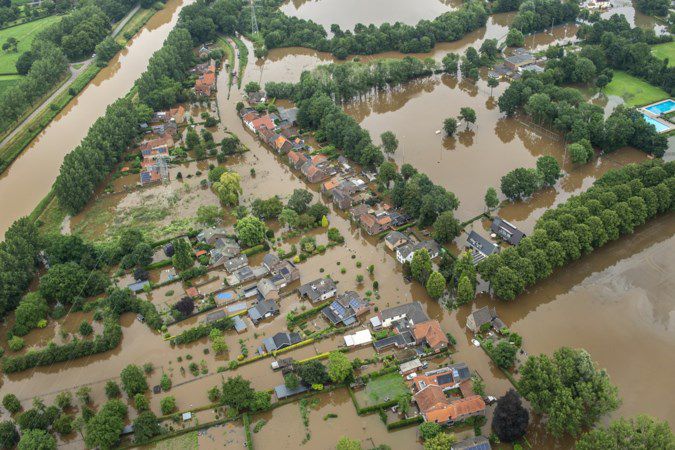 7. Room for the river

Keep walking along the river until you are next to the point where the Maas divides into the river and the canal. The intersection here is the South William Canal’s drainage canal breaking away from the Maas. The river then divides into the Juliana Canal further along. The Juliana Canal opened in 1935 and provided a water route to bypass an unnavigable section of the Maas. It serves as the main trading route between Limburg and the Rhine delta. The river itself continues north in between the two canals and meanders into its natural bed for the next fifty kilometres. Navigating on the canals, the river itself remained untouched. The Grensmaas Project restored natural areas created with riverbed widening and floodplain lowering. The vegetation diversity tripled as a result and many species returned to the area. The Grensmaas Project is part of a broader shift in Dutch water management called “Room for the River”. This new approach focuses on lowering floodplains to create space for the river to overflow without hindering existing infrastructure. This reflects a return to the amphibious culture of living with the river, rather than fighting it. Future urban planning of Maastricht’s city centre reflects this new approach and parts of the city centre might transform into green areas. Giving space for people to enjoy the river and for the river to come out of its bed every now and then.

Continue walking by the river then turn right on Pastoor Moormanstraat. Keep the water on your left until Ameliebrug. Cross the bridge, walk back to the main street and make your way back to Bureau Europa by walking underneath the Noorderbrug, back into the hustle and bustle of the city centre.